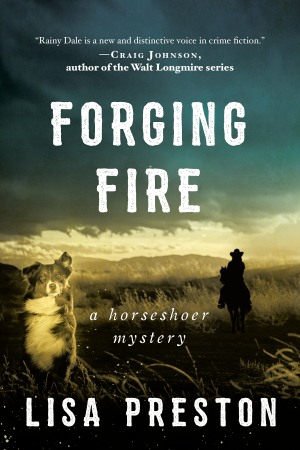 Days before her wedding, Rainy jumps at a chance to visit the fabled Black Bluff bull sale down in California, but things go awry when she is assaulted and her truck is stolen.

In this twist on the “locked-room” form, more than one mystery is hidden on the ranch where Rainy and her dog, Charley, end up. Everyone—the owners, ranch hands, angry neighbors, and perhaps even the deliveryman who brings coke coal for the ranch’s old-fashioned forge—is harboring a damaging secret. When Rainy realizes that even her dog knows a grisly hidden truth, the stakes are raised as high as life and death.
Praise for Dead Blow
A tough yet vulnerable farrier tracks a killer, makes new friends, and commits to marriage.Rainy Dale has settled into Cowdry, the small Oregon town she calls home. She's living with her boyfriend, Guy, a chef whose interest in food is as intense as her own interest in horses. Rainy's newest customer, Donna Chevigny, a widow whose husband, Cameron, died under suspicious circumstances, wants Rainy to shoe some horses she plans to sell. The area where the horses are kept, which is especially difficult to reach because Donna's neighbor refuses to let her cross his property, is the site of Cameron's death in a tractor rollover and home of a dangerous killer rodeo bull Cameron and a friend had hoped to use to start a stock business. Rainy offers to use her dog, Charley, to help bring in some cattle from the same area and remove the tractor's flat tire for repair. At the corral and shed where they work, Rainy finds a discarded horseshoe which her practiced eye tells her is not from a ranch horse, and Donna's dog makes an even more disturbing discovery: a glove containing a human hand. At length the hand is identified as belonging to Arielle Blake, the former girlfriend of Donna's neighbor, whose remains are soon located in a shallow grave. Arielle's affair with Cameron, one of several he was carrying on, makes Donna a likely suspect in both deaths. Overcoming her initial suspicions, Rainy comes to admire Donna. As she goes about her business, she ponders the mystery and picks up clues. All the while, Melinda Kellan, an ambitious police clerk with whom Rainy's developed a love/hate relationship (The Clincher, 2018), hopes to use Rainy's knowledge to help solve the murders and fulfill her dream of becoming a police officer.A gritty tale with a complex mystery and an unusual heroine.
―Kirkus Book Reviews

In Preston’s enjoyable sequel to 2018’s The Clincher, Rainy Dale, the intrepid horseshoer of Cowdry, Ore., takes on a new client, rancher Donna Chevigny, whose husband, Cameron, died the previous year in a tractor accident. Rainy welcomes the job as a chance to help someone hard-pressed to manage a cattle ranch all on her own. Everything changes, though, when Donna’s dog finds a glove with a human hand in it.

In Preston’s enjoyable sequel to 2018’s The Clincher, Rainy Dale, the intrepid horseshoer of Cowdry, Ore., takes on a new client, rancher Donna Chevigny, whose husband, Cameron, died the previous year in a tractor accident. Rainy welcomes the job as a chance to help someone hard-pressed to manage a cattle ranch all on her own. Everything changes, though, when Donna’s dog finds a glove with a human hand in it. The hand belongs to Arielle Blake, a young woman who went missing about the same time Cameron died. Are the two deaths related? Was Donna involved with either death? What about Arielle’s fiancé? Rainy becomes mired in clues, suspects, and questions, with no answers in sight. Rainy, a strong, down-home, likable sleuth, has just the right amount of attitude to give her some gumption. The horseshoeing jargon and details of the tools of the trade may be more than some readers care to know, but Preston delivers a steady ride right up to the satisfying ending. Hopefully, Rainy will be back soon.

Lisa Preston is surely the finest, and most sure-handed writer of equine-themed mysteries since the days of the blessed Dick Francis, and her protagonist, horse-shoer (yes, you read that right) Rainy Dale is a lively, appealing one-of-a-kind. Dead Blow is great fun to read, partly because of the clever, quirky, twisty plot, but even more so because of the frequent peeks into Rainy's clever, quirky, twisty mind.  May the series long continue.

Lisa Preston puts her own sharp edge on this fast-moving contemporary western thriller. Her heroine, young Rainy Dale, is a female horse shoer, as strong and passionate of mind as she is strong of back. When accidents in her central Oregon paradise don't seem so accidental, and evil holds the whip hand as the bodies start piling up, Rainy proves that cold steel and hot iron are for deadlier deeds than shoeing horses.